Anatomy of a High-performing Developer Team

What makes a high-performing developer team different from a low-performing one?

In this post, we extracted actionable insights from the State of Software Development 2018 report to reveal some cool stats about high-performing teams.

After collecting and cleaning the data, we filtered out the low- and medium-performing teams, separating them from the high-performing ones.

The performance evaluation in the survey was based on the respondents’ self-evaluating question regarding their team’s performance.

You will see how top teams attract, hire and retain talents and by what standards they measure performance. In some cases, the difference between high- and low-performing teams is also highlighted.

The most popular ways high-performing teams get talent on board is through employee referrals (23.07%) and by having an in-house recruiter (17.04%). 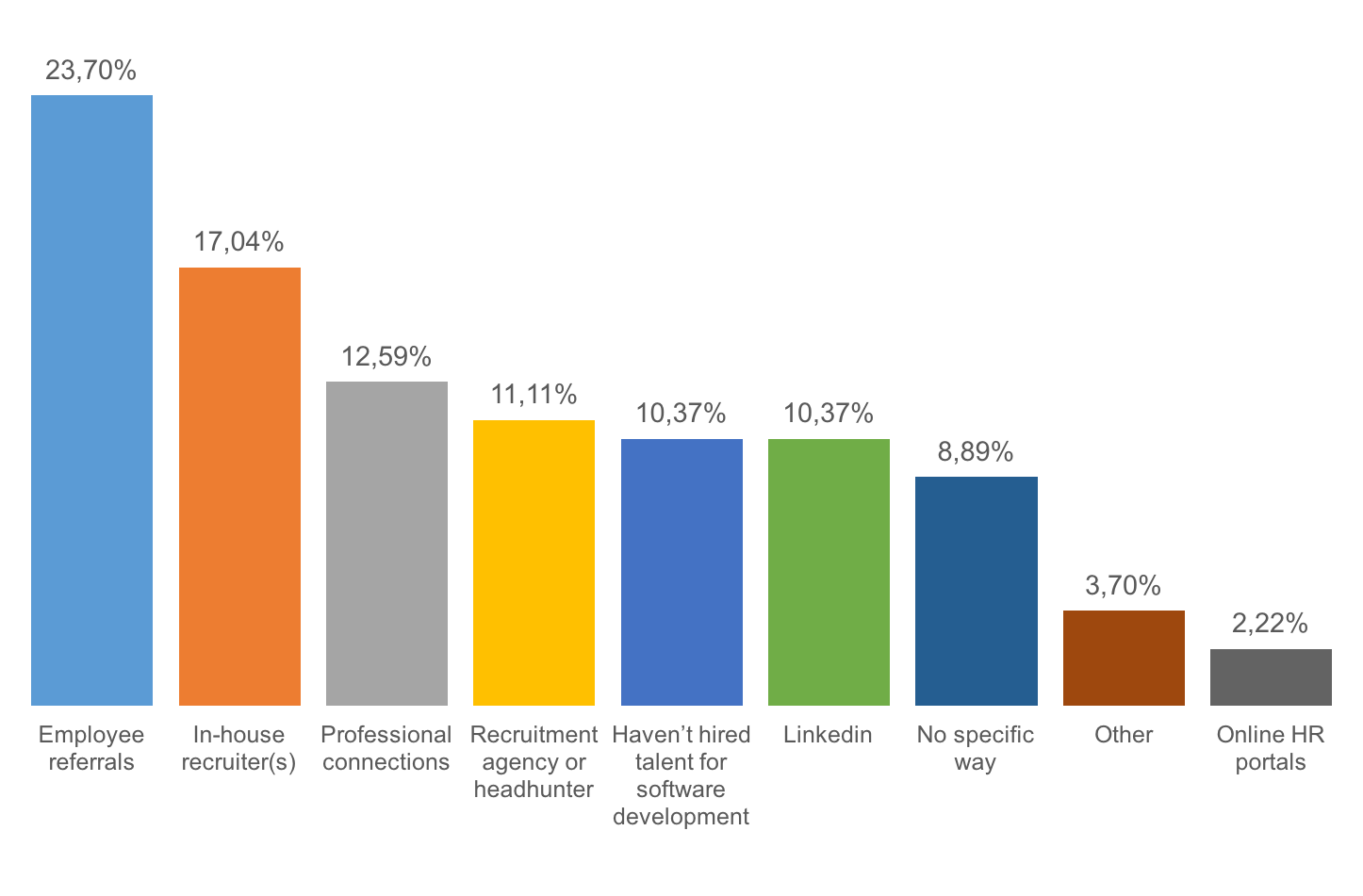 It’s also interesting to see the most important hiring criteria they measure candidates against.

Almost half (45.93%) of the high-performing teams consider willingness to learn the most important hiring criteria. It’s 12.4 times more important than having a degree.

Just think about it, since software development is changing rapidly, it’s a must to hire someone who is open to learn new technologies.

Flexibility and cultural fitness in software development is much more important nowadays than any kind of certification or degree.

Research confirms that employees who are aligned with the company’s value are more likely to have high satisfaction, engagement and retention. 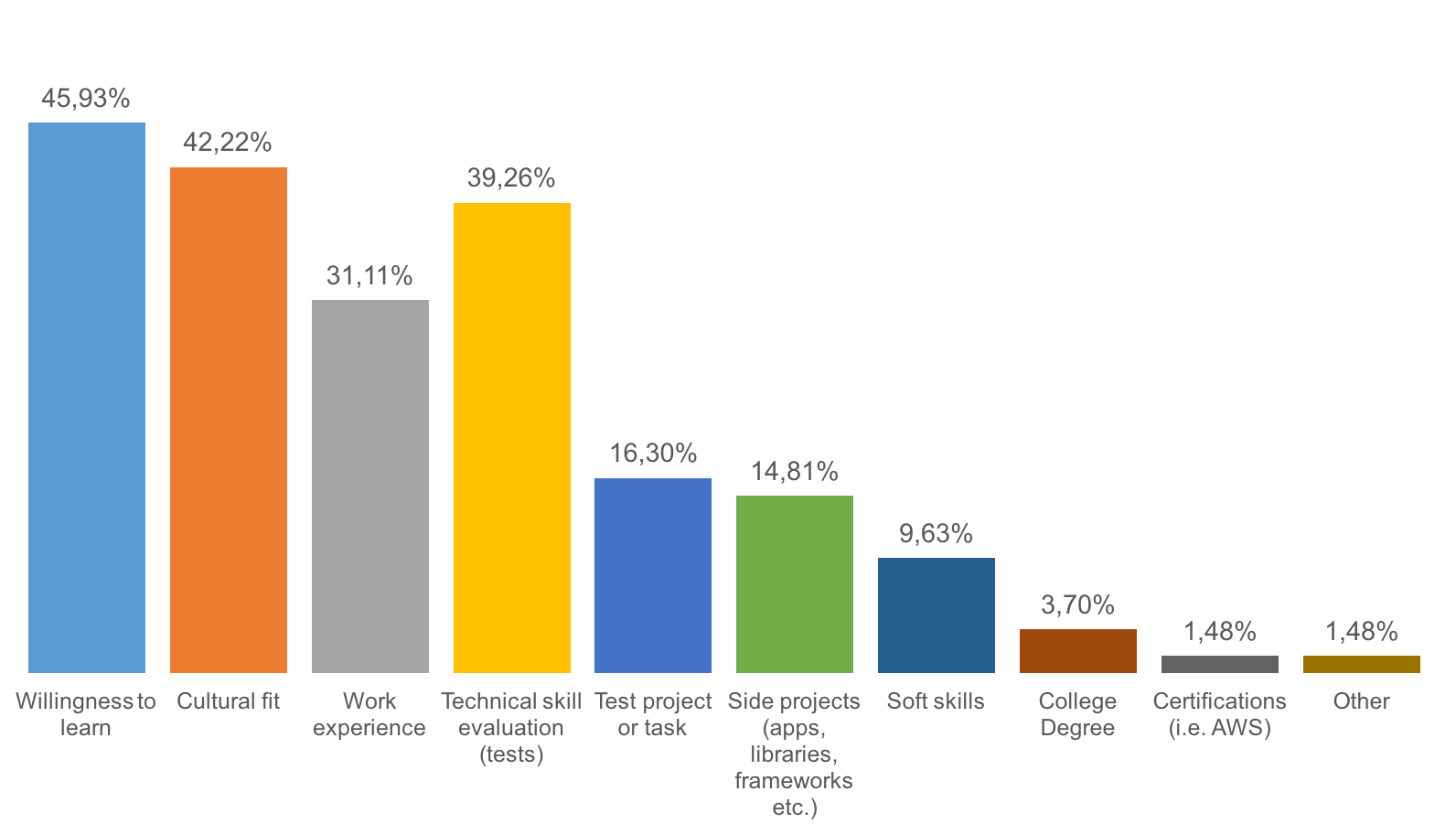 If you want to hire someone who is a good cultural fit, here are some suggestions.

First, you need to be crystal clear with your company’s value. This is what you want to measure your candidates against.

Here is a great way to make your company’s culture easier to digest: create a 10-point list, highlighting the most critical values your company and team members represent. This is what Buffer did pretty well; check out their company manifesto here.

It not only makes the values easier to remember and present but also much easier to evaluate if a candidate is aligned with these values.

Now you know where you should focus.

What about a willingness to learn? How can you detect that?

Guess what, it’s not the money.

However, 17% of the high-performing team members said money was a motivating factor (there is no significant difference compared to average performers).

Challenging, engaging tasks and cool team culture are not only great to attract talent, but these are what keep them motivated; more than 68,89% and 60,74% of tech people working in a high-performing team said so. 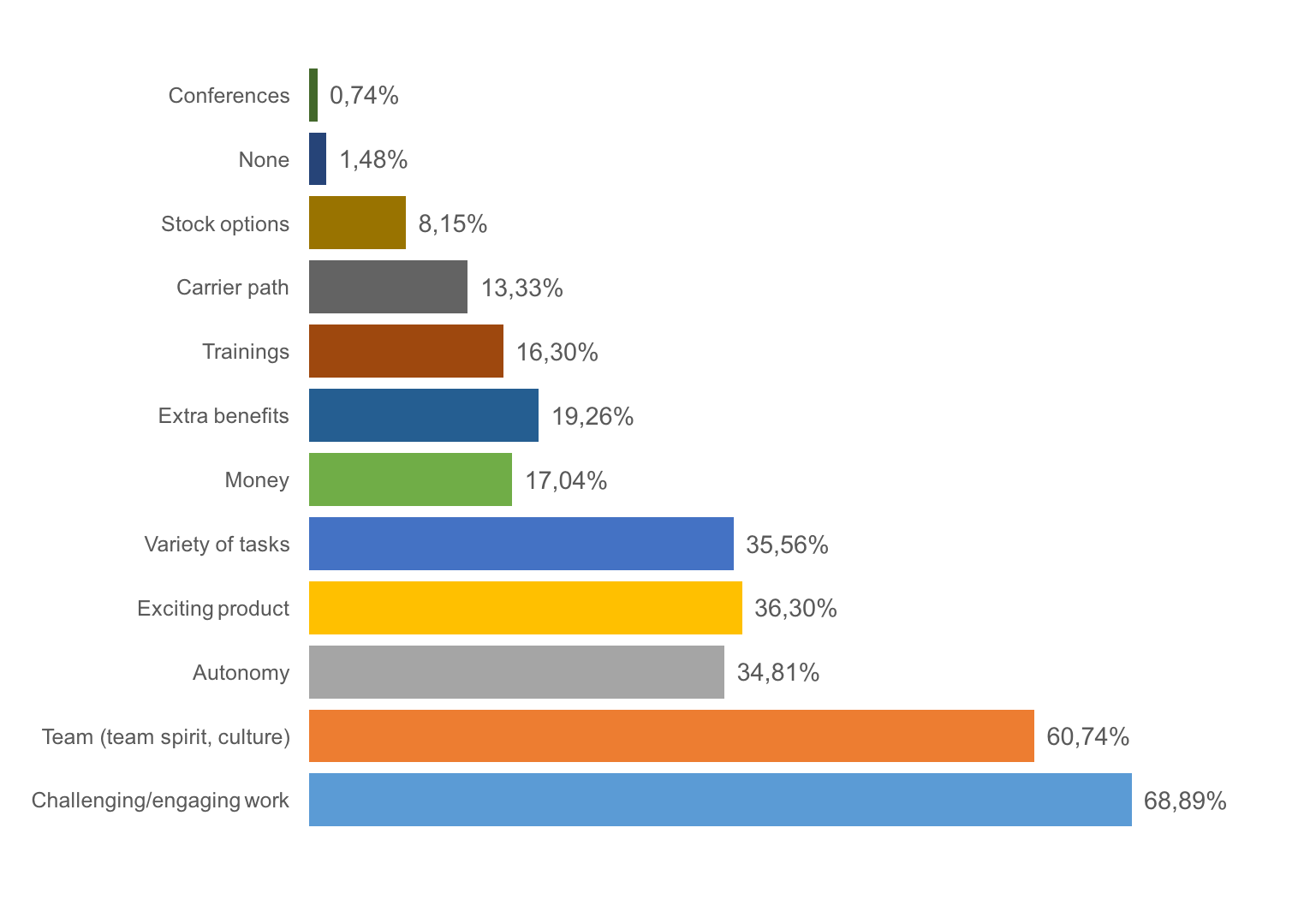 Okay, we know how high-performing dev teams hire and retain talent and what the critical hiring factors are that matter.

But how is performance managed in these teams? More specifically, how do they measure performance?

Rather, I think there are some smaller metrics that could be measured and also there are non-measurable factors that should be included in the performance evaluation to paint a realistic picture of the developer’s and team’s performance.

What do they measure when it comes to measuring performance? It turned out the most important “metric” for high-performing developer teams is working software.

Yes. Not number of codes written, not time spent, not the number of bugs, but working software. In the end, this is what really matters—this is the main goal that’s aligned with the business goals.

The second point of view is the number of completed tasks. The more tasks a developer completes, the better his/her performance is considered.

But the way developer managers are measured is a bit different.

22.96% of the respondents from high-performance teams answered that software developer managers are not measured by any concrete criteria. While 22.22% of them said working software is the number one metric besides on-time delivery (20%).

It’s interesting to see the source of delivery problems.

From the data, you can’t see significant differences between average- and high-performing developer teams. The only thing that pops up is that 10.69% of average-performing team members say lack of team experience is the number one cause of delivery problems, more than 3 times higher than top-performing teams.

Also, missing key skills in the team (6.29%) is 4 times higher than for the top-performing teams.

However, there are many factors that influence performance, but based on the survey participants’ answers, we can say that the more experience a team possesses, chances are that their overall performance is higher as well.

It’s really hard to give a detailed picture of a high-performing team; it requires a much deeper study. Our intention with this post was to provide some exciting data along with some tips based on the latest State of Software Development report to inspire you to adjust the way you manage your team and to improve its performance.

👉 Developer Burnout: How Can a Manager Spot It and Stop It