But, this post will show you how to fix it. 🔧

From Deloitte’s survey, it turns out that half the executives questioned (58%) believed their performance management approach drove neither engagement nor high performance.

The essential elements of performance management are missing.

Most of the tech companies are following some kind of agile software development methodology that allows them to iterate fast, learn from mistakes and focus on the things that drive business value. You rarely see 1-year development cycles without breaking it up into smaller chunks. It absolutely makes sense to break up a project into 1- to 2-week sprints or milestones.

Why don’t we do the same when it comes to evaluating the performance of our developer teams? Performance reviews aren't great if they just happen once a year.

Leading tech organizations such as Netflix and HubSpot are scrapping the annual performance review cycle and replacing it with ongoing feedback and coaching designed to promote continuous employee development.

The current performance management system should be transformed into a nimbler, real-time, and more individualized system that focuses on fueling performance in the future rather than assessing the past.

The hallmarks of the new performance management system require speed, agility and constant learning based on reliable performance data.

We assume the ratings measure the performance of our team members but actually what is being measured by the ratings is the unique rating tendencies of the rater. Thus, ratings reveal more about the rater than they do about the ratee, according to Manuel London.

The most effective way for an individual and also for an organization to learn fast is through constant feedback.

Without constantly learning from mistakes, the speed of learning and also performance improvement will slow down. This should be the most important part of every performance management system.

A more agile performance management system is needed that is able to recognize, see, and fuel performance.

There are three interlocking rituals to support them: 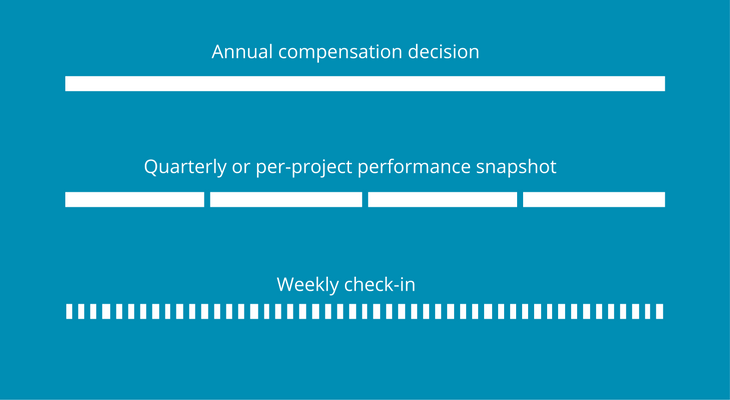 HOW TO MEASURE PERFORMANCE?

In our State of Software Development survey, we asked tech leaders what metrics they used to measure performance. This is what they said. 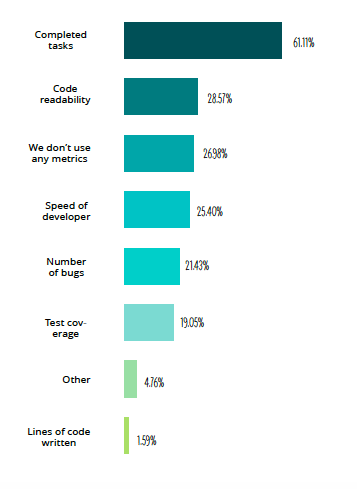 The number of completed tasks and code readability are the top ways to measure a software developer’s performance. However, 27% of them didn’t use any kind of metrics to measure performance.

When it comes to quantifying performance, we try to express a team member’s performance in a single number.

More understanding comes from conversations about how a team member is doing or between leaders as they consider someone’s compensation or career. These conversations are served by not only one but many data points. This lets team leaders capture the context and diversity of an individual.

WHY SHOULD YOU DROP APPRAISALS? 🥛

According to Peter Cappelli and Anna Tavis, there are 3 main reasons for dropping appraisals.

1. The return of people development 👪

Companies need to improve their talent management effort in order to stay competitive against competitors.

One of the most effective ways an employee can improve is through rich, frequent feedback from team leaders and supervisors that should manifest in informal check-ins. This way, they can apply the advice more effectively, achieving  goals faster.

Business changes rapidly in the tech industry; being fast and learning fast is the source of competitive advantage. Businesses no longer have clear annual cycles, so feedback loops should take place more often. There are two fundamental questions team leaders should ask:

Annual goals have been replaced with short-term priority settings (audits).

3. The centrality of teamwork 🤽

Moving away from forced ranking and appraisals focusing on individual accountability makes it easier to foster teamwork.

These reasons argue for a system that more closely follows the natural cycle of work. If your company wants to become a truly agile organization, your performance management system should be aligned with this working method.

Conversations between team leaders and team members should take place when a project is finished, a milestone is reached or a challenge comes up.

WHAT ARE COMPANIES DOING WHO DROPPED YEARLY PERFORMANCE REVIEWS?

Let’s take Netflix as an example. 📺

When determining goals, managers are responsible for making their employees aware of the following:

When one of the team members does something dumb, instead of blaming her, ask yourself what context you failed to set.

At Netflix, managers and employees have performance conversations as an organic, regular part of their work.

When we stopped doing formal performance reviews, we instituted informal 360-degree reviews. We kept them fairly simple: People were asked to identify things that colleagues should stop, start, or continue. In the beginning, we used an anonymous software system, but over time we shifted to signed feedback, and many teams held their 360s face-to-face.Hbr.org

HOW SHOULD PERFORMANCE EVALUATION BE PERFORMED? HERE ARE SOME TIPS.

It’s highly recommended to hold more frequent performance reviews but how should these reviews look like? The example below shows how Deloitte do it.

It’s recommended to have review after every milestones or sprints or in case of long-term processes in every quarter. During these reviews, leaders should respond to four, future-focused statements about each team member.

Data should be collected and weighed during the year according to project length and difficulty and used for promotional decisions quarterly or yearly depending on your business's’ practice.

Giving feedback and compensation decisions should be separated. 🤼‍♀️

Team leaders have to give frequent feedback to team members as possible, this way helping them not to repeat the same mistake again and also helps them learn faster through frequent iterations.

These informal conversations serve as a starting point when it comes to midyear and end-of-year review for promotion and compensation reasons.

If you want people to talk about how to do their best work in the near future, they need to talk often.

To give a structure for promotion/compensation-related reviews, here are the questions that team leaders at Deloitte use:

1. Given what I know of this person’s performance, and if it were my money, I would award this person the highest possible compensation increase and bonus.🏅

2. Given what I know of this person’s performance, I would always want him/her on my team. 👪

3. This person is at risk for low performance 💣

4. Is this person ready for promotion? 🏆

There are other factors that must be considered when it comes to compensation to see the context of the employee's performance such as project difficulty and other contributions to the organization.

Feedback giving and compensation/promotion-related sessions should be separated.

As a team leader, you need to give feedback through informal talks as frequently as possible while compensation-related reviews should be conducted based on informal talks you conducted during the quarter or year.

However, this post provides some tips on how to transform your performance management system. You should adapt it to your own organization that requires some experimentation and feedback from your team members.